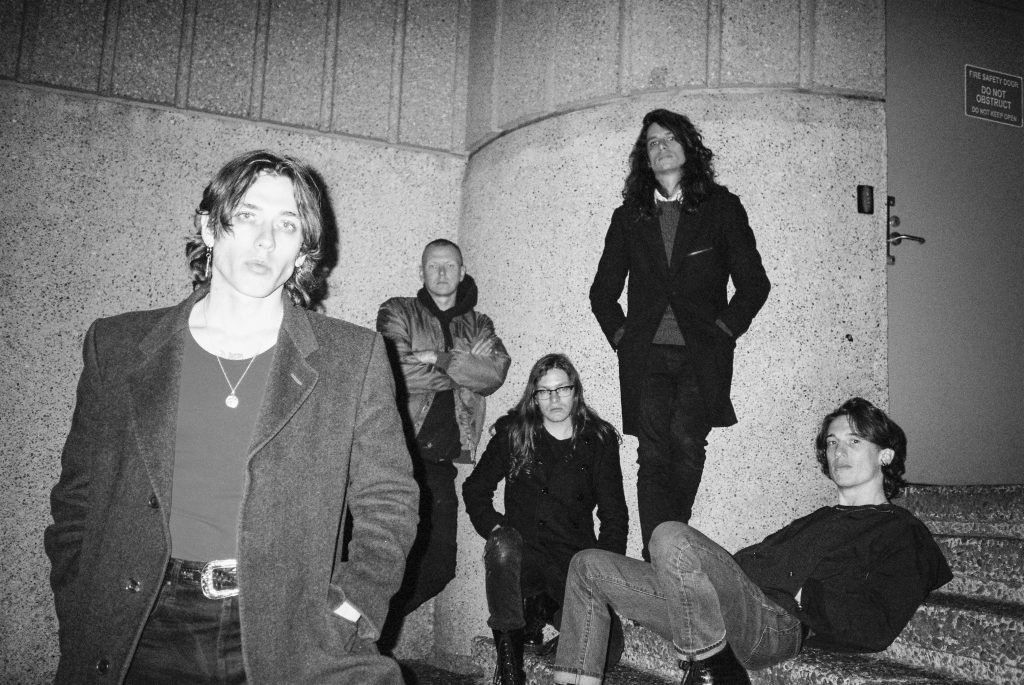 Sticky carpets, a perpetual wafting odour of booze, and the bright depressing lights of an overstuffed pokies room in a decrepit Sydney hotel (or bar, for the uninitiated) might be the kind of setting you’re most likely to find Enclave. However, it would be wrong to discount them as another run-of-the-mill group you’d ordinarily find making noisy sounds in such settings.

Enclave are a band who demand volume. They sound equal parts familiar and surprising, but are not supposed to be fully understood on the first take. Take a look under the hood and what you’ll find is a mess. Take it for a drive and you’ll find the banged-up-beauty does the trick (albeit with an endearing backfire from time to time).

Consisting of Pat McCarthy (Lyrics/Vox), John Hynd (drums), Ryan Adamson (Bass), Roberto Klaic (Synthesizer/Electronics), and Audrey McCarthy (Guitar/Feedback), Enclave are a band I knew existed and whose members I was familiar with, but whose particulars I am only recently acquainted with. There’s a reason for this, and it’s hidden in the title.

World In Progress, the band’s first official release, is a five track EP and the culmination of 2 years of pandemic-induced uncertainty. The inconsistency of it all had led to the band focusing on their aggressive and confrontational live performances when possible, but with actual recordings falling by the wayside due to logistical reasons. World In Progress being an ironic nod to the time that had passed us by.

On World In Progress, you can almost feel the malnourishment of the band as these skinny starving artists painfully choke out their last morsels of energy into the five tracks on this record. The result being a meeting point of vocal raw abandonment and structured instrumentation where those last morsels of energy translate into protein-deficient rage.

EP opener, “W.I.P”, exemplifies these qualities well. Opening with a hazy synth line before moving into the looping hook of the song, vocalist Pat gives a manic and chesty vocal performance where the very real threat of a spontaneous tangent looms large. All the while, the band sounds tight, consistent, and explosive, providing the launchpad that the vocals need.

Some light bits of synth experimentalism makes itself known on the tracks “Pale Guilt” and “Bloodletting”. Taking a more straight-forward punk approach and a sense of expansiveness respectively, the tracks put the dynamic abilities of the group on full display. “Bloodletting” in particular being a highlight for the standout lyrics and guitar noise.

Rounding out with “No Way To Live” and “To The Lost”, the EP ends with many of the previously mentioned qualities in-tow. The lingering impression being of a band who have no shortage of note-taking from The Birthday Party in a similar way that The Horrors did on their first album.

Like all first EPs, the production could be stepped up a notch. Furthermore, there are opportunities to more effectively exploit the individual talents of each band member (granted, the limitations of a five track EP).

However, the ideas are solid, the band is tight, and the dedication is there. With more shows, more releases, and a continually growing reputation there is no reason to say we won’t be seeing more of Enclave in the future. For an aggressive kind of post-punk with some noise rock/art-rock sensibilities, World In Progress is definitely worth seeking out, especially in a live setting.