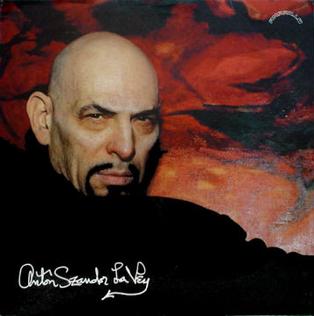 “BOMBASTIC, the next big thing after Industrial Music is BOMBASTIC Music…”

Anton Szandor LaVey (born Howard Stanton Levey; April 11, 1930 – October 29, 1997) is predominantly known as the founder and former head of the church of Satan and for his writings and work around the Satanic thematic in the occult. LaVey authored several books, including The Satanic Bible, The Satanic Rituals, The Satanic Witch, The Devil’s Notebook, and Satan Speaks. In addition, he released three albums, including The Satanic Mass, Satan Takes a Holiday, and of course, Strange Music. Genesis Breyer P-Orridge was quoted as saying that LaVey was very interested in BOMBASTIC MUSIC and that it was the next big thing after Industrial Music.

I had the pleasure of speaking with Carl Abrahamsson, a personal friend of the Anton and the LeVay family and publisher of the book “Anton LaVey and the Church of Satan:

Infernal Wisdom from the Devil’s Den“. When I asked Carl about bombastic music, he responded, “He (Anton) spoke of bombastic music and wrote about it, too. In my book, there’s a previously unpublished talk between Gen(sis Breyer P-Orridge) and LaVey, in which they roam through subjects like bombastic music and the magical essence of “secrecy.” It’s a fascinating document. He did foresee a return of bombastic music, meaning “more power, but not necessarily louder.” For him, the impact of emotional tonality was significant. A piece of music could be subtle and sentimental or loud and crashing, but the bombastic lies in the piece’s power to compel emotionally and perhaps in other ways too.”

The original 7-track full-length album was released on a limited edition of 250 10″ records through Amarillo Records in 1994. LaVey uses digital FM wavetable keyboards and household cheap orchestra organs that emulate acoustic sounds such as the cornet and the banjo in the stylings of old pop standards. LeVay’s voice is not featured; his then-wife, Blanche Barton, vocals appear on “Start the Day Right” and the closer “Gloomy Sunday.” The production is – not great – though it unintentionally encompasses energy through the lo-fis of recording to reel-to-reel tape. Regardless of the outcome, LaVey had to possess a self-awareness that consisted of a good sense of humour or an ironic affinity for this very harmless, puritanical, and tongue-in-cheek expression of music. From what I gathered; it will forever remain a mystery. “Part of being entertained at the Black House was LaVey playing music in the kitchen, where he had all his synthesizers. It was always an incredible experience. He had a lot of Chico Marx in him – smiles, winks, very playful fingers and odd performance styles. But of course, always elegantly sinister, too”, said Carl. “He knew a lot of music by heart and could put together amazing medleys that could be disparate on the surface yet always blended so well. These sessions were a big part of his ritual magic – at which he excelled! Unfortunately, I was not around at the recording sessions of “Strange Music,” but it was the same era: late 80s, early 90s.”

“Gloomy Sunday” (Hungarian: Szomorú vasárnap), also known as the “Hungarian Suicide Song,” was initially composed by Hungarian pianist and composer Rezső Seress and published in 1933. Before popularly known as Gloomy Sunday – it was initially titled “Vége a világnak” (The World is Ending), and the lyrics were based on despair caused by war, ending in a quiet prayer about human sins. The poet László Jávor wrote his own words for the song, titled Szomorú vasárnap (Sad Sunday), in which the protagonist wants to commit suicide following his lover’s death. The latter lyrics became more popular while the former was essentially forgotten. The song was first recorded in Hungarian by Pál Kalmár in 1935. Closing out this ‘bombastic’ and ‘adventurous’ journey that is truly strange Music, Blanche Barton sings on this version of the original Hungarian masterpiece – that does not quite transcribe on Strange Music.

What does transcribe is certainly eerie, as there is consistent energy maintained in these somewhat poorly recorded tracks. Some of the most incredible Music comes from naivety – in practice and production. It’s difficult to tell if there is naivety at play or if it is some twisted projection from LaVey’s perverse humour. It sometimes feels as if one is listening to a musical score for an old silent black and white film reel. The percussion present on the organ is unprocessed, unaffected – almost like he was recording the junky built-in speaker of the organ. Upon listening without knowing the composer, one would likely not be able to put together that the man behind the Music is also behind The Satanic Bible. However, with the context in place – this album will stand the test of time as part of LeVay‘s legacy and his demonic spirit in conjunction with the sinister-looking photograph on the album cover. I believe the novelty to be robust and interesting, though I couldn’t agree that Strange Music is something that I enjoy. Without disrespect, I do not find the music stimulating or challenging – nor strong in a classical songwriting sense. Anton LaVey Strange Music, a long out-of-print 10″, is a rare collectable item, though it also saw a reissue on cassette currently available in distros across the globe. You just have to dig a little.

I’d like to offer a special thanks to Carl Abrahamsson for taking the time to speak with me. A long-time occultist and writer, Carl also ran EU TOPY (The Temple of Psychick Youth) and is currently publishing books and other multimedia material on TRAPART Books. You can learn more about Carl’s works and support him here

“As a teenager, I felt that LaVeyan Satanism resonated with me. It was fresh, new, and innovative compared to many other “occult” stuff (which was/is a re-hashing of ancient concepts, with very few updates). I also found LaVey very cool! I was at this time (the mid-1980s) also enamoured with Jayne Mansfield and a big fan of American “trash” culture (à la John Waters). Finding out that Mansfield and LaVey had known each other and that she had been a member of the Church of Satan was incredibly fascinating. My band White Stains wrote the song “Sweet Jayne” about her and LaVey, and Genesis encouraged me to send that record to LaVey. I did and got a very enthusiastic letter back, which led to my visits to San Francisco and the Black House. All of this and more I felt a strong need to write about; this process turned into the film “Anton LaVey – Into the Devil’s Den” (2019) and the recently published book “Anton LaVey and the Church of Satan – Infernal Wisdom from the Devil’s Den” (2022).”

Anton Lavey Strange Music was rereleased by Deathbed Tapes in 2022 in a limited quantity of 250. Tapes are available from Flesh Prison Records. 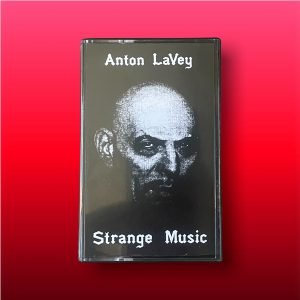 ALBUM REVIEW: KOLLAPS – UNTIL THE DAY I DIE