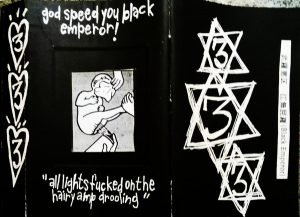 The long sought after, All Lights Fucked on the Hairy Amp Drooling, by Godspeed You! Black Emperor has been leaked online. The 68 minute long demo from 1994 was released in only 33 copies, and was regarded with mythical status due to scepticism about its existence.

The release first surfaced on on /mu/, a corner of 4Chan devoted to music discourse, lost albums, and general shit-posting. Since then, it has been uploaded to YouTube and made available as a Mega Upload File.

Previous hoaxes relating to All Lights Fucked on the Hairy Amp Drooling have led to speculation on the authenticity of this leak. Although, mounting evidence from internet sleuths seems to suggest that this time, it’s the real deal.

Speaking about the release in a 2010 interview with The 405, Efrim Manuck stated:

“I don’t know why it hasn’t turned up on the internet yet. I’ve been looking. I thought I’d found it once, and after a maddeningly exciting wait for the thing to download, it turned out to be the band’s Peel Session hidden in a misleading zip file. That’s funny. I keep expecting it’s gonna pop up but it never does.”

Sound-wise, there is little to All Lights Fucked on the Hairy Amp Drooling that ties it to any subsequent releases (little beyond some similar guitar tunings and re-used samples, anyway). The inclusion of vocals across its 27 tracks further isolates this from Godspeed’s future work. It’s a basic 4-track home recording that includes punk, noise-rock, and experimental tendencies alongside enjoyably deluded lyrical content. It holds interest for more than just completionists, but for anyone interested in hearing the band find their feet and experiment before the more decisive and expansive post-rock route that would be taken on future releases.

Godspeed You! Black Emperor was featured on Discipline Mag’s 21 Albums of 2021 end of year list.

Listen to All Lights Fucked on the Hairy Amp Drooling in its entirety below, or alternatively, download it from this Mega link.