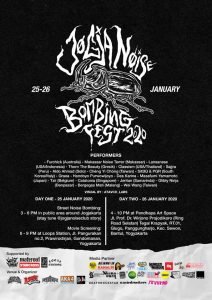 At a glance, Indonesia is a country best known in religious terms for its status as the world’s largest Islamic nation, anthropologically for having the world’s most diverse collection of primate species and geographically for having more islands than any other nation. But the nation of Indonesia is more stimulating than a few tired superlatives and its palm oil industry would have you believe. Well below the surface, buried by layers of corruption, environmental exploitation and socially conservative values lies an innate, unbreakable hunger for DiY subculture and outsider art.

But like many developing nations, funding (or support of any kind) for the arts is scarce and this fate hasn’t skipped Indonesia. Similarly to the aggressive and uncompromising punk/skinhead/crust/grind movement, operating without funding results in the noise scene’s complete dependence on people power. In this sense, the noise scene (and its affiliates) function more as a lifestyle than a subculture or hobby. Rarely a country to work in halves, this nuance is perfectly suited to Indonesia’s cultural climate, a country that doesn’t peek over the edge, but jumps straight in. The appetite for pain and boundless experimentation manifests into Indonesia’s wild world of noise and extreme experimental electronics.

Like any fruitful underground movement, Indonesia’s noise scene consists of far more than a haphazard scattering of wayward artists. Having been organised and given a platform by the collective Jogja Noise Bombing for the best part of 10 years and operating out of the noise scene stronghold and cultural capital of Yogyakarta, Jogja Noise Bombing is the safe haven for Indonesia’s avant-garde. This pivotal open community has been the central figure in promoting artists, distributing releases and putting on shows including, but not limited to Jogja Noise Bombing Festival which has been held since 2013.

If mimicking the Japa-noise scene or Europe’s industrial leanings were the intention, then they should have quit long ago. The self-sustained and unashamedly DiY Jogja Noise Bombing and the Indonesian noise scene at large come with a quirk. A cornerstone that sets the Indonesian noise scene apart from their counterparts abroad is their commitment to guerrilla street performances. These chaotic events involve artists who ‘bomb’ a public space with loud, harsh and improvised electronics, powering their rigs with generators or locally acquired stolen electricity (usually a stray motorbike). Often held in busy locations, often in broad daylight and always without warning, these performances do more than simply piss off the general public, but take noise back to its most primal definition, into unwanted sound.

The culmination of this movement materialises annually as the Jogja Noise Bombing Festival, with 2020’s instalment being on Saturday and Sunday the 25th and 26th of January. The international event is hosting artists from across Asia (Singapore, Taiwan, Thailand and Japan) and stretches further afield (Belgium, Australia and Peru). The 2 day festival is broken up as follows:

Day 1 will terrorize the streets with Guerrilla Noise Bombings followed by noise music related movie screenings. Jogja Noise Bombing have instructed attendees to consult the @jogjanoiseclub Instagram story to chase and find the guerrilla noise performances that are being held around the city. By nightfall, there will be film and documentary screenings at a venue called Loops Station.

Day 2 will be a slightly more conventional festival set-up. Starting at 4pm, artists will perform at the Pendhapa Art Space in the city’s Sewon district.

Discipline Mag will be there!

During the course of the festival stay tuned through the Instagram handle @disciplinemag. Discipline Mag will be bringing you the thrill of the chase, interviews and the pain and transcendence of bullshit loud live experiments. 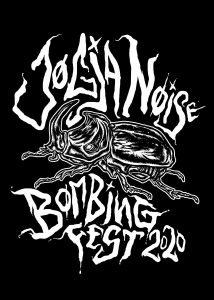 DEATH AND THE CITY: A conversation about extreme music in Pakistan