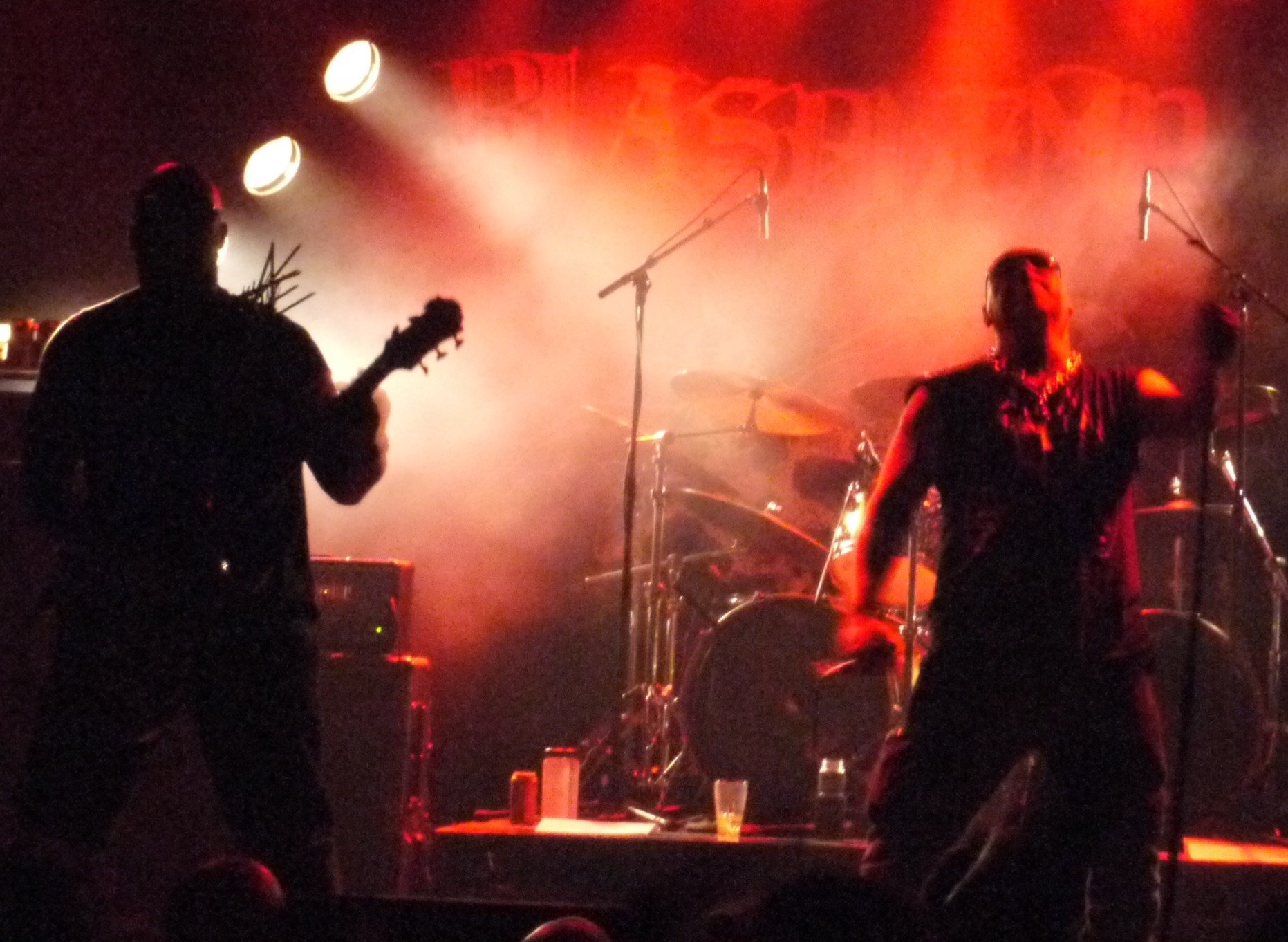 Presumably full of those too poor to be at Dark Mofo, or those with lingering memories of the previous year’s festivities, Canada’s war/black/death metal heroes, Blasphemy, descended upon a modest sized crowd in Max Watt’s last night. As I attended Dark Mofo 2018 but missed the Hymns to the Dead event, I saw last night as a cheap shot at redemption for both missing Blasphemy last year and not attending Dark Mofo this year.

Opening the event was the crust-infected thrash metallers, Reaper. This was the second time I’ve seen Reaper, the first being in support for Mortiis at the Bendigo Hotel in 2018, and I gotta say, I feel they were a much better fit and more appreciated last night. Sporting the signature bare chest and spiked jacket, the vocalist guided us through their set with his savage vocals, wild stage presence and disaffected commentary. I like what these guys do; thrash and gore from the disenfranchised, blissfully free from the bells and whistles that can hinder such an essential sound in metal.

Second support was from absolute shredders, Vomitor. I wasn’t especially familiar with these Melbourne death metal lads, but I was definitely in the minority as most of the audience seemed well in tune with their set. Forward facing pelvises shielded by guitars while supported on arched knees in formation of 3, this image is perhaps what I will remember best of Vomitor’s set. That, on top of the sea of synchronised headbanging that was in clear view from my slightly elevated position. Vomitor celebrated the 90’s heyday of death metal, and did it well.

As their headline performance at Dark Mofo’s 2018 Hymns to the Dead event was much lauded and very memorable (so I’ve been told), I’m not exactly sure why Blasphemy chose to coincide their 2019 Australia tour with Dark Mofo’s dates (only 5 days out from the date of the 2018 show in fact). Logic tells me these dates are connected, but falls short of telling me why. The rather reclusive band could be throwing a bone to those who missed out last year, but this is at odds with the Melbourne exodus to Hobart right now, as evidenced through the smaller than usual attendance at Max Watt’s.

In short, I don’t know, but the venue did moderately fill up and tensions were high as Blasphemy assaulted patrons with their especially guttural brand of war metal. Nocturnal Grave Desecrator spilled forth his inhuman, more reptilian croaks at ear piercing levels to Blasphemy’s classics from their two albums. Aided by one of the sharpest snares I’ve heard, the frequencies emanating from voiceXstick were, even with earplugs, offensively loud.

A friend of mine delightfully told me Blasphemy’s 2018 show was ‘disgusting’, and I think he was on the money. The sounds they create are so gut wrenching, so vile that it’s hard to believe it is mere humans producing them. That said things didn’t go as smoothly as planned, there were a few long pauses between songs and Nocturnal Grave Desecrator fell straight over while balancing on his mic stand as the show began. I dare say this independent tour was less orchestrated than 2018, but that need not be disparaging. I can’t imagine this tour’s setlist differed too greatly from last year’s, but with only two albums and such a meaty legacy, Blasphemy is one of the true masters of extremity for a reason.