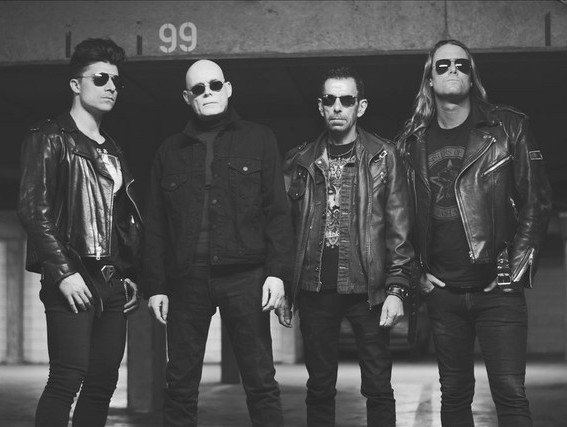 The Sisters of Mercy have spent four decades serenading the young and old with their iconic goth rock anthems. As both an entry point and continually relevant entity in the overlapping goth/post-punk/new wave spectrums, the Sisters occupy a special place for many enthusiasts of the dark sounds of the 80s.

Through major label disputes, personnel changes, and a defiant lack of recorded output, the Sisters of Mercy now appear to be the masters of their own fortunes. In light of their upcoming Australian tour, Discipline Mag spoke with the Australian guitarist and newest recruit Dylan Smith from his home in The Netherlands about touring his homeland, playing Europe’s biggest metal festivals, curated support slots, and of course, the Sisters’ beloved Doktor Avalanche.

As I was thinking, for me, being Australian, it’s double-edged. Obviously for the band we love to come there and it’s great to play and the audience is great. But for me, I get to come back and do a home show like every night. And there’s my friends and family, and all the cities. I love it, it’s great.

Also the weather, the food, the people. I don’t think there’s a band in the world who doesn’t really wanna tour Australia. It’s an honour and a privilege, actually. I’m pretty stoked to be coming back.

Yeah, nice one. How does the rest of the band feel? Because obviously there’s a slight little bit of bias there on your part.

*Laughs* I think Ben just brings more sunscreen, basically. They’re all really excited, but I just get a bit more sun, which is the case normally.

How do they go in the sun? Do they go red?

Honestly, there’s been once in Barcelona this year, no Valencia this year where we played a festival. I managed to get Ben and Ravey Davey on the beach with me for the first time ever. And it was very exhilarating. But I’ve never seen it happen again. They get red pretty quick, and the rest of the crew get red pretty quick. It’s not like I’m immune to it, It’s just I actively go looking for it.

It’s in your DNA though, isn’t it.

Yeah, I know. But I still gotta try. As you can see I’m a bit tanned now, I’ve just come back from Greece.

How did you come to join the Sisters of Mercy?

Obviously, I moved to Europe a while back and met Ben through bands. He played in a band that I moved there for and we were really good friends while we were playing together. Then fast forward to when the Sisters of Mercy were looking, Ben said “Hey?” and I said “yeah” and then, after an audition in London, I was playing in the band pretty quick after that. It’s a pretty cool story but yeah, it was Ben’s suggestion and I think it worked out pretty good.

Something that’s kind of interesting about your tenure in the band is that your first show with the Sisters of Mercy was at Hellfest.

That’s right. First gig. Just walk out and do it, it was cool. But that was it, I was in the band, and it was like, “let’s see how you go – here’s your guitar, out you go and go and do it.” We didn’t even really talk about it. It was a very interesting first show, I really enjoyed it. I have fond memories of that.

And then the second was Wacken, wasn’t it?

*Laughs* Yeah exactly, so there’s the second gig. That was pretty cool. By the second gig I was like “ahh ok, it’s only Wacken. Don’t worry, it’s just Wacken.” No, it was good, I came in hot, but it was fine. It wasn’t like I hadn’t played festivals before, I’ve been in bands since I was 15. But you’re right, to walk out as a member of the Sisters is different and a big step up.

Absolutely. I know your previous band, i Nation, has been around since the mid-late 2000s and you’ve done some pretty cool supports. I saw that you supported The Young Gods at one point.

Absolutely, I’m a big fan of them, they’re great. I guess it’s bit of a jump going from playing mid-sized support slots like that, to playing stadiums. How did you adjust to that? Judging from what you’ve said so far, it sounds like you got into the groove of things pretty quick?

Yeah, I mean, it sounds a bit cheesy, but I don’t have a problem walking out on stage. Whether it’s a small one or a big one, I get what I’m doing and I’m going to do the same show, it’s just me.

When it’s a bigger stage, I suppose you have to walk further, practically – *laughs*. And you’ve got to time it better getting back to the mic. Sometimes if you catch me and Ben running, you’ll know why, because we didn’t time it well. That’s the biggest bit for us, stage travel, and choice of footwear on stage, you need better shoes to get to the other side *laughs*. But it’s fine, I guess I’ve always been a performer, so it’s fine.

Actually, the smaller shows are the hardest. You ask most musicians, like a cafe gig, it would be more terrifying than a 10,000 person festival because it’s more intimate. When it’s big, it’s just different. It’s not really a struggle.

More stage space and less likelihood of smashing a band mate in the face with the head of your guitar.

No, no. It’s good. It’s an art form though, it’s a skill, performing on stage. Especially in the dark and in the glasses and stuff.

It was an interesting era in terms of the shows played, and the bands played with, back on the 2019 tour. It seemed like the band had a taste for some of the heavier stuff and I’m alluding not only to the Hellfest and Wacken performances, but also to handpicking of Amenra to support.

They’re crushing live. Have you seen them live?

I haven’t seen them live, but I have read and heard about their performances.

Just the intro, I thought my head was going to explode because it was that heavy. They hadn’t even started playing. They’re an amazing band.

How did the Sisters of Mercy come to pick them as support? Because, as I’m aware, they were specifically selected by the band.

I’m pretty sure it was Andrew’s choice. As far as I’m aware he always picks the bands and he has great taste in music and that’s how we ended up with them. He reaches out to bands he wants to work with and that was a great pairing. Same with AA Williams, fantastic fantastic band if you haven’t checked them out. We had a lot of supports from them and again, it was a fantastic choice. It’s not an accident [Amenra] were there, we do have a plan for things.

I guess Eldritch then, he’s not stuck in the past, but he’s keeping up with contemporary music.

Absolutely, he’s always about the future, that’s the thing. He loves the “new”, he loves all of the new stuff we’re doing and he always wants the band to be moving forward. He’s all about the future and he’s definitely got his finger on the pulse. Absolutely not dwelling on the past at all.

Something I’ve noticed with the Sisters of Mercy is that they seem to have a rare sense of autonomy compared to some of their contemporaries. This is in the sense that they seem to have gone through a few legal disputes with record labels, but they’ve managed to seize their back catalogue and now have control over it. However, certain other artists have fallen prey to predatory record label contracts in the 80s and have never really gotten out of them. What’s the feeling in the band about all of this? Is there a sense of liberation amongst the band members as a result?

A lot of that stuff is before my time so I don’t really comment. I don’t really know much about it at all, to be honest. All the proceedings and this and that. So I prefer not to comment.

No problems at all. I have a question about Doktor Avalanche – is he sentient?

“Yes,” and “no.” I appreciate the ambiguity.

I can’t give away all of the secrets.

No, you cannot, but what can we expect from your upcoming shows in Australia? New tracks?

Absolutely. If you’ve been watching what we’ve been doing in Europe on YouTube we’ve been doing a lot of new material. At some points up to 50% on a single night are all new. So, you’re definitely going to hear songs you wanna hear, and definitely going to hear some songs you haven’t heard unless you’ve been to the show. And if you have, then sing along. So, definitely a mix. We’re not going to be just doing, not that we ever have, only the old stuff. But there’s plenty of it, so don’t worry, there’s a good balance.

New record. Is there a new record coming out?

Ah no, that’s all the time I’ve got unfortunately, man. I’m going to have to go.

No worries. Thank you very much for your time. Looking forward to Melbourne.